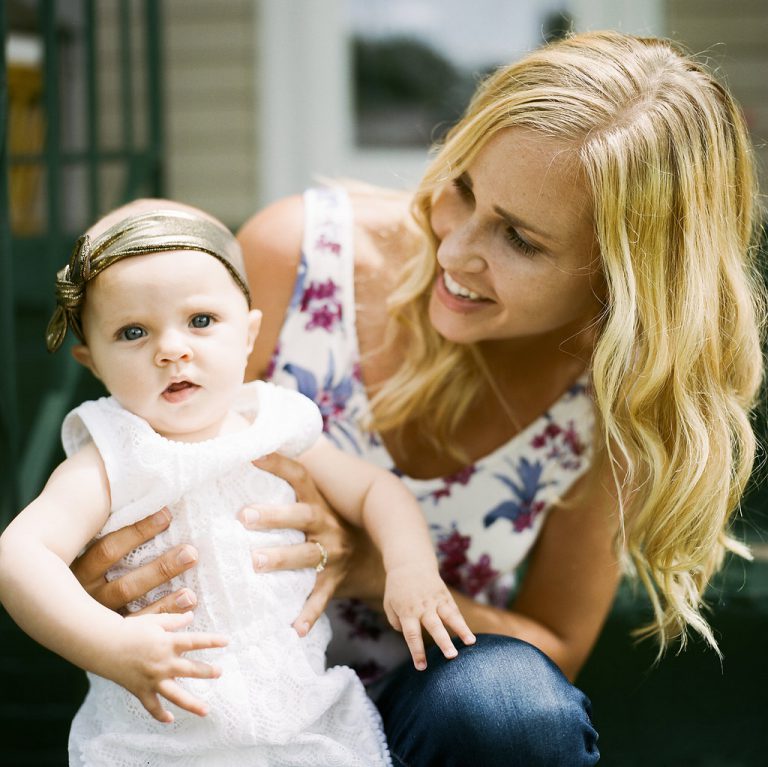 This isn’t something I thought I would share about—at least not publicly. It’s vulnerable. But here I am. I know every mother’s story is different with each baby—whether breastfeeding or formula feeding. Here is my story.

I don’t love breastfeeding but I don’t hate it either. I breastfed my first child Maddox until he was 15 months old and since we supplemented with formula the last few months it was super easy to wean him. It felt like the right time. I don’t remember even having hormonal things or sadness or anything.

With Ivory it’s been a whole different story.

She was exclusively breastfed the first 6 months but would occasionally take a pumped bottled, once a week or so. She LOVES food, real food so adding in solids at 6 months was easy.

I went to California for a conference for 4 days when Ivory was 8 months old. She had been nursing about 3-4 times a day and sleeping through the night since 6 months old. She was only nursing off the left side for about the last month which was weird to me, but whatever.

I don’t know how or why that happened but I read it can be normal and some women only breast feed off one side their whole time. I was nervous about leaving her because I thought maybe she wouldn’t go back to breastfeeding. But nevertheless, I went. I tried to pump when I was gone but got very little. Calvin fed her formula the whole time I was gone. She did great.
When coming home Ivory breastfed immediately, didn’t miss a beat and I was so relieved. See it’s okay, “you had nothing to worry about,” I thought to myself.

But the next morning she only nursed for a few minutes and then started to cry, like really hard. Frustration or hunger, probably both. I was like oh my gosh, I think my supply is down. I gave her a bottle. I kept offering her to nurse but she would turn her head the other way. Like she didn’t even want to nurse. She wasn’t interested.

I knew that if she would at least keep nursing my supply would adjust again but if she wouldn’t even nurse then it would become less. I went and got the tea that’s supposed to increase your milk supply, I ate oatmeal, I tried pumping, I researched, I talked to friends, I prayed. But mostly I cried.

I remember my sister came to visit and I couldn’t stop crying. At TJMAXX shopping, in the car, and in my house tears would well up and overflow. Calling my mom, calling my sister, calling my dad even, the tears would not stop flowing. I felt rejected. I felt like a failure. I felt like I had made a mistake leaving her.

I remember weeping at my counter cutting up a pineapple and I felt like like the Lord was speaking to me…”Camille just as much as you are the best source for Ivory to be nourished, you can’t force her to you. That is how I feel about my people. I am the best source, THE LIFE SOURCE for them but I don’t force them to me. It grieves me when they don’t choose Me either. I feel your pain. I can meet you in this place.” I wept even more.

The next morning Ivory nursed. I was so thankful. I couldn’t believe it. It was only in the morning though. It went on and off for the next month, her nursing most mornings until at just over 9 months she finished for the last time. It had been several mornings in a row and she would just turn the other way. So finally I just stopped offering.

And the next day my period came back. Just like that. And my hormones were in overload. It was madness. Lots of tears, frustrations, anxious thoughts. Hormones are real and they can do some crazy things. It’s only been two weeks so I am still in the middle of those, still in the process. I don’t think it helped that we moved our family across the world at the same time, but that’s just how it worked out.

I still feel sad, I still miss breastfeeding. I celebrate the 9 months I was able to and I accept that it’s not longer. That its the end of our breastfeeding journey together. I was so angry at myself that I left Ivory to go to the conference, because I know she would still be breastfeeding if I hadn’t left her. I have had to work through the feelings of loss and regret. I have grieved. It’s been real. The emotions have been real. The rejection has been real.

I still don’t understand everything. Maybe I went through this so I could understand other women’s struggles or relate to their pain or so in the future I can be a voice of comfort because I have gone through it. Or to understand more of God’s heart when people don’t choose Him. Or to be brought to such a place of desperation for God to meet me in this place to comfort my hurting heart. I am not really sure.

But whatever it is, I know it’s real. And it’s my story.

Let me know if you’ve had a similar experience below or on our facebook page.